Mickey Bushell MBE, Paralympic gold medalist and multi world championship medalist. I've been racing for 21 years. I'm still competing, but also along side that I coach other athletes and mentor other wheelchair users to get the most out of life. 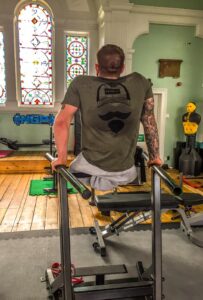 I was born with a rare condition called lumbar sacral congenital paraplegia which basically means I'm missing the last 7 vertebrae from my spine and I have small crossed legs that look a little like chicken wings.

My parents were told I'd never walk, sit, move or be able to do anything for myself.

yet by 1 I was doing handstands!

10 years old I did my first racing competition

At 16 I made my first senior world championships coming 10th

At 18 I made my first Paralympic Games taking a silver medal, just a year later I managed to break the 100m world record.

At 22 I  went to my biggest games London 2012 securing the gold medal.

After the great success of a home games, I sadly had some bumps in the road one being in 2013 where I suffered a shoulder injury, I still made the world champ team for that year and getting a silver medal.

But the toughest time I've had to over come was in 2015 where I had a uti that turned to sepsis and I was very close to death, this took me out of the sport for over 9 months, again bounced back to make the Rio 2016 para games and came 6th in the final. Only a year later I found myself at another world championships back on home soil in London once again getting back on the podium securing a silver medal.

my current aims are to get back to full fitness and compete on a world stage, there has been various hiccups over last few years that I have slowly worked though and now is the time to come back and try to win more medals