Conrad Singh is an International Tennis Coach who has spent the past 28 years working all over the world. In this time he has worked with countless top players and been involved in educating tennis coaches on every continent.
Coming from Melbourne Australia, he has been fortunate to hold posts at several leading academies and consulted to multiple national associations as well as leading federations and national teams.
He has been a pioneer since the mid 90's as a Biomechanist and his coaching methodology and philosophy has been used extensively with great success 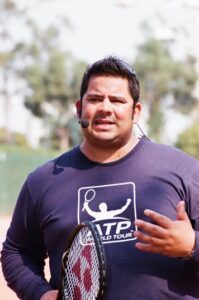 My favorite sports event/memory/moment is ... has been working with the Chinese Womens Federation Cup team in 2005 which included a team which had won 7 Grand Slams with  Li Na and Zhang Jie.  Another favorite is being on court with Roger Federer, Novak Djokovic and Rafael Nadal in Shanghai during the Shanghai Rolex Masters. Working with the best of the best is an experience that I will never forget!

As the CEO of Tennis, Conrad Singh produces countless top Ivy League, Division One and Grand Slam Competitors with outstanding results on every stage.  Singh is an Innovator, educator and is a globally recognized expert and leader in the tennis industry amongst Coaches and Professional Players. He has been working at every level for the better part of 28 years and has been fortunate to work all over the world.

He is a regular lecturer and presenter at World Conferences, Sports Science Seminars, International Summits, ITF, Grand Slam, and National Conferences, as well as Online Coach Education Platforms.  He authored the Tennis Coaches Australia Biomechanics Module in the National Coaching Manual in Australia and is a regular contributor for Associations and Magazines such as the Australian, Japanese and Chinese Tennis Magazines, and New York Tennis Magazine on various specialist topics.

Singh  sits on the USTA High Performance Commission and is on the Board of Directors for the ATPCA. He has held multiple roles consulting on the Professional Tour and worked as the Head Coach of National Teams and also has been appointed as a Regional Expert and Learning Facilitator for Tennis Australia, Chinese Tennis Association & Japanese Tennis Association among others.

Singh has developed Top National, College, Grand Slam, Fed, and Davis Cup athletes along with World Number 1 ITF Junior Athletes. He has worked with Top 50 athletes regularly and has his own specific proven methodology. Singh has coached players at over 55 Grand Slams throughout his career and still consults as a specialist to many current tour players around the world.

He has been a pioneer in his native Australia and Asia developing players over 28 years and his philosophy of “Teach what is Essential , Encourage what is Natural and Allow for Each Individual” is at the forefront of his daily work.

The ultimate goal is to raise the level within the tennis industry of coaching excellence.

Conrad’s aim is to provide world class experiences for players with high level aspiration combined with individualized planning and the right balance of program to achieve full potential.

By working closely with Parents, Coaches, Academies and Players, he believes we are able to achieve peak performance.

Ongoing education is a life long pursuit, networking and the sharing of quality content is paramount to raising the bar within the industry.