My name is Tomas Ferrari. I am a Track & Field student-athlete at the University of Arkansas. I'll show you what a day in the life of the NCAA's best track team looks like. Meets, travels, training routines and much more. Follow me! 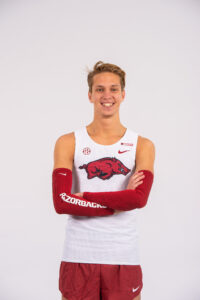 My life as a student-athlete raised in Argentina, my home country, has taught me many valuable lessons since 2018, when I started track & field. I learned to take baby steps by setting short term goals that could bring me closer to larger milestones, like becoming an Olympic high jumper.

In 2019, I took a huge leap–literally and metaphorically– when I reached a new personal record and hit the 2.10m mark, an out of the blue 10 cm increase from my lifetime best. Such an unusual surprise completely changed my connection to this sport. I was awarded a silver medal at the National Championship and became qualified to compete at international junior competitions.

2020 made it obvious that working hard becomes a habit through practice and repetition. When 2021 began, I realized that I had transformed my behavior in a way that working hard now felt simple and effortless. I met my goals for the spring season without much resistance. I not only broke my personal record jumping 2.15m, but also debuted at a major international championship. The icing on the cake was reaching 100k followers on Instagram, taking my influencer career on an unimagined, exhilarating ride.

In the last four years, I started to take my goals more seriously. Slowly, I gained more consciousness of my ultimate goal: the Olympic Games. I’m convinced that success primarily comes from focused and consistent work. That means avoiding distractions and shortcuts to fast results. It’s about being patient and staying truthful to the process, trying different approaches and strategies, and never forgetting the purpose behind what you’re doing. As I continue to dedicate time and effort to my dream, the more confident I feel about succeeding and overcoming any future hurdles that may arise along my road to the Olympics.