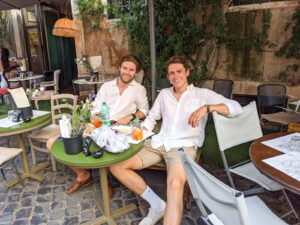 I was a national level gymnast until the age of 13. After gymnastics, I tried my hand at Aerial Skiing on a family holiday at 15, two weeks later I competed at my first international event and never looked back.

Both my parents represented Team GB at the Olympics in the 80s and 90s in Freestyle Skiing, some say I was born to do it, I say I was just lucky enough that my parents let me do it as they know how dangerous/extreme it is.

Within 2 years of picking up the sport, I was competing at World Cups and World Championships with my parents coaching me. Unfortunately, I'm the only person who does Aerials in the UK, so there is no British team and very little (no) funding, so I've always had to cut corners in my preparations to afford to get to competitions. I was fortunate enough that the Swiss team felt sorry for me so adopted me 8 years ago and I've trained alongside them ever since. My coach Mich has taken me to 2 Olympic Games despite me representing a different country.

I love all sports and I try to lead an outdoors lifestyle even when I'm not training. Tennis, Rugby, Climbing, Padel, Running, Hiking, Football, Skating, Kitesurfing you name it I play it! When I'm not playing sport you can find me talking nonsense with my mates in the pub.

Medal at the Milan 2026 Winter Olympics

Continue to balance my life as an athlete and agent