My name is Laila Kamil. I am currently 14 years old. I have loved tennis ever since I was 5 years old. I have been playing tennis for almost 10 years now. My dad was the one who introduced me to the sport and was my first coach. Everyday I read, watch and learn more skills in tennis. I can never imagine my life without it! I like to watch professional tennis matches and analyze how they would play.

When I’m exercising or training, I like to focus hard on what I’m doing. I usually try not to get distracted by the things that are going on around me. I push hard until the very end of my training. 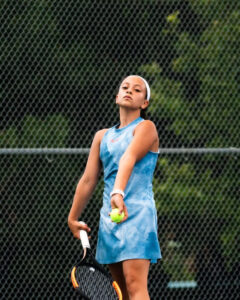 Any Sponsors = Partial sponsorship by Wilson

Career Aspirations = I am eager to become a professional tennis player! Beyond my tennis career, I would like to open my own business where it could be tennis related or maybe an extension of my education degree which could be in the fields of law, engineering, or phycology.

Favourite Tournament = There’s many different tournaments that I enjoyed playing. One tournament that I really enjoyed was NAT U14 Provincial Circuit June 1st-2nd 2019. I was Finalist where I enjoyed the level of quality of the games, how I played and demonstrated a significant amount of focus and effort especially Semi and Final matches.

Best Win = One of my best wins was the ATI @ Veneto U12 Provincial Circuit March 28th-31st 2019. This was one of my best wins because I endured until the end of the match without distraction. The person I played was one that I played a couple of times before, so I was able to really focus on her weak points and build up on that.

Goals for year = My goal for the year is to make it to the top 10 in Canada. Another goal I would like to have is to increase my fitness and court time by 3hr a week. I would also like to accomplish keeping a strong mindset on and off the court. ITF tournaments are becoming more and more in my focus zone for 2022 and I would like to gain knowledge on how to prepare for such tournaments.

Aside from the things I want to achieve physically, I’d like to be able to control my mind during matches. I want to be able to cut out all the distractions and thoughts in my head and focus on the match. I also would like to practice more on staying calm, even if I’m down in the match.

I have been playing tennis for over 9 years and I’ve never put my racket down ever since. I have been playing tournaments since I was about 7 years old. I was also able to experience playing outside of Ontario, in Montreal, and won a few awards there. I take my training seriously and focus on the things I need to improve. I always seek the chances I get and make sure to use every bit of it.

I am in a French immersion Elementary school. I’m currently in grade 8 and will be moving on to high school next September 2021. I have some great marks in math, ranging from between 85-95%.

Unfortunately with the COVID circumstances, I was not able to play many tournaments since last year (meaning my rank has gone down). Currently, in the U14 girls singles, I am ranked 61 in Canada, and ranked 55 in girls U14 doubles. Locally, I am ranked 31 in U14 singles.

Laila is a talented, competitive and sweet character that loved tennis from the day she stepped foot on courts at the age of 5 years. Laila demonstrated perseverance and discipline since she was a little girl as she surprised everyone who knew her by the persistence to be on courts at least 3 days every week, waking up at 7am to be in the court for training before she goes to her school with another 2-3 hours, 3 times a week in her academy training program and wouldn\'t be satisfied with less than exceptional performance during practice and training. Laila started competitive tennis when she was 7.5 years old in U8 and U9 tournaments. She continued to progress very well as top player in U10 versing not only girls of her age but also boys of the same category. She was the youngest female player to be acknowledged and awarded by Tennis Canada and Ontario Tennis Association 3 times in a row; U8, U9 and U10 as a top player. The one consistent fact among all academies she’s been to and coaches who trained her is that she is a talented young girl with great potential to be a great international tennis player as she eagerly drives her towards her goal. Laila’s best ranking was 15 across Canada in U12 and due to multiple challenges, her ranking dropped to 61 Canada ranking and 31 Ontario one in U14. She’s extremely eager and hungry to get back to her previous level and even more, to be in the top 5 by the time she is turning 16! Laila’s achievements not only in Tennis but also as a Corporal cadet in Canadian Air Force, ranked 1 st in AF fitness competition and 4 th in public speech, were an inspiration to many of her friends and colleagues in school and social life. I am very confident that her future tennis career will be an inspiration to other younger players across the world.