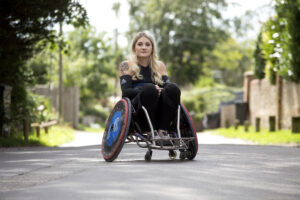 An athlete, show jumper, and aspiring Olympian all of her life, within just three years of her life-changing spinal injury in 2006 Kylie returned to competitive sport by cycling 450 km, from Vietnam to Cambodia, to raise money for Regain, a charity dedicated to helping get newly injured tetraplegics back into sport. Having undergone a remarkably swift personal rehabilitation herself, she now seeks to help others do the same and continues to undertake sponsored rides around the world for Regain.

She started playing for the London Wheelchair Rugby Club in 2009, and for Great Britain in 2011. In 2012 she qualified for her first Paralympics in London in which the team finished fifth.

“Sport has saved my life. My experiences since 2006—and particularly my journey back to sport, teamwork, and a strong relationship with my body—have helped me to overcome many obstacles in my life, and sharing the lessons I’ve learned to help motivate and inspire others is a huge honour. It’s so important for those with life-changing injuries to know that life goes on, and so can they. It’s equally important for sportsmen and women of all levels of ability to be reminded of what’s possible, and all that they are lucky to have: a team, a mission, a life to live to the fullest. You just have to go out there and get it.”

My Goals for the future are to compete with the Wheelchair Rugby team in my fourth Paralympic Games at Paris 2024.

To continue my work as Harlequins Foundation Ambassador and Jesters Coach, to gain experience as a Wheelchair rugby coach and to keep inspiring the next generation to take up Sport.

Continue my work as Patron of Regain Sports Charity to help get newly injured Tetraplegics back into Sport after a sporting, leisure or recreational activity accident.

Finally to continue my path of Professional speaking.

We asked Kylie to join us at our annual Global Sales Summit as a guest speaker to share her \'Journey To Gold\' with the team. Kylie aligned to our theme of \'Think Big, Learn Fast\' and the feedback has been extremely positive. Not only does Kylie take you through her journey from the very start (before her accident) to the current day, but right through the detail of all of the ups and downs, challenges, setbacks, opportunities and celebrations. Her appetite for success and her boundless motivation is inspiration. Finally, it was a real \'human\' story with emotion, this really captivated the audience throughout.

Kylie gave an incredible speech to our EMEA team to mark one year of working from home. Her story was profoundly moving, inspiring and motivating. It is impossible to listen to Kylie and not gain a new perspective on the power of positive thinking. She spoke bravely and openly about the challenges she faced in her life- and how she has worked with determination to overcome them. She gave us some powerful and thought provoking insights, as well as tools and techniques to stay motivated. It was an absolute pleasure to spend an hour in her company.

I just had to drop you a line to let you know how utterly blown away I and everyone else was. What an incredible story you have to tell. Kylie very kindly took the time to talk to myself and my team mates on a zoom call. You really did engage everyone so well and there were tears and laughs across the screen. I think we felt like we were living those moments with you as you spoke. So thank you very much for sharing. A true inspiration and in these trying times it was a wonderful boost to hear you speak of your limitless motivation.

Kylie Grimes was an amazing asset to the Farnham Falcons women’s rugby team pre-match prep. Giving up her valuable and limited time to be with us during an exceptionally busy schedule was greatly appreciated. Her talk about how sport and teamwork have had such a positive impact on her life inspired us as a team to go out with a positive mental attitude. Some sneaky tips and code words to help players process and relax on the pitch was something the team found really helpful. Kylie is an inspiration to sport. She promotes every element of teamwork and is an honorary member of the Falcon Family.