My name is Jadesola Cole (born 26/09/2006) in Manchester United Kingdom. I am a junior international tennis player from Great Britain, I was Great Britain junior number 1 with many National and international titles, my highest Europe ranking was 33 and world Junior ITF ranking is Top 468.

I started playing tennis at age of 3, right handed and double handed backhand player, Height: 5ft10.
My Favourite tennis Player is serena williams, as we shared the same Date and month of birth, my Best Surface is Hard Surface.
I’m sponsor with equipment by Wilson tennis and Ellesse. 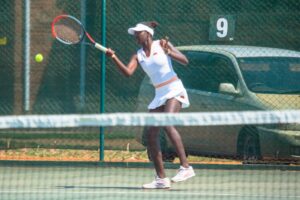 I’m a international tennis player with good foundation of tennis. I was a Great Britain junior number 1, currently dropped to top 32 in U16 national ranking because of my focus on my international career and my highest Europe ranking was 33, my ITF junior ranking is 468 in the world.

I was age 14years when I started my journey in world junior ITF international circuit, in the last 6 months, I have improved my ITF international ranking From 2753 to top 468 In the world, my achievements is just by playing little tournaments we can avoid. My goals is to improve my ranking to be able to play in junior grand slams and started playing in international women’s circuit in 2023.

ITF tournaments are more expensive and I need support to be able to play more tournaments to improve my ranking and to be the world best tennis player.

4 times semifinal of U12 National singles and doubles Titles England.

I played in the prestigious world Championship U14 junior events:

I represent Great Britain in the United state of America and against the French. I represented Great Britain in orange bowl (USA), Auray (France) and other events that was cancelled due to corona virus in Croacia and Maia Potugal. Over the next year I’m  committed to focus on training and continue my success in world junior ITF tournaments.

My aim and goals is to be a professional tennis player and to improve my ranking to top 150 in the world junior ITF, also to be able to play in junior grand slams and also to start playing in the international women’s tournaments in 2023, I want to be the world best player.

I have known Jade for 2 years in my capacity as U18 Performance manager at the University of Bath Tennis Academy. Jade has terrific potential to achieve in Senior Tennis. In my opinion Jade has a number of the key attributes essential to success in Senior Tennis these are: * A love of competing and the game. * Timing and ability to generate pace. * Athletic ability. Please feel free to contact me.

I have been working with Jadesola for some years now and her resilience points towards the fact that she has great potential to reach a very high level in tennis. Her ability to amend on errors is absolutely remarkable. Her work rate at training is also impressive and this had worked to her advantages in most of her matches. Her resolve to excel has also been pivotal to the continuous progress as reflected in her outings at the last ITF tournaments which I was privileged to be her Coach. Serving as her traveling Coach to various ITF tournaments, I’m very sure she will develop further through the years as there are indications that her exceptional talent will come to fore with more tournaments. By and large Jadesola has a very bright future in tennis and a total commitment of time, and energy...

I have know Jade for 6 years and have seen her develop her game over that period. Jade has very good potential and I’m sure within the next 12 months can be top 250 in the junior ITF world rankings and within the next 2 years top 100 in the world. I am confident she will compete in junior Grand Slam events with further hard work and perseverance. She has a potential big game with excellent ball striking skills and timing. Jade also possess a great work ethic practising and training to a high level every day. She shows commitment to achieving the best possible level she can and I am positive she has a future in the senior game on the WTA tour as well.