I am a tennis player from North London, and I am currently studying at Cambridge University. I play on the Blues team there, and am also part of Middlesex county tennis.
I also represent the Great Britain team in Deaf Tennis, and have won medals in both the junior and Men's events. I'm currently the National Men's Deaf tennis champion, and hold the world number 2 ranking in the Boy's category. 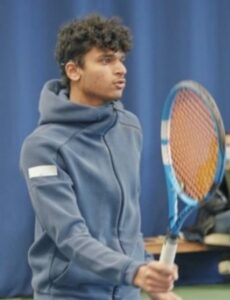 My tennis journey started out with watching my older brother play, while having no real interest in the sport myself, until one day when I decided to join in at the end of a session. The coach said that he saw potential in me, and suggested that I join my brother's sessions more often. I took his advice, and my tennis lessons went from 15 minutes, to half an hour, to full hour individual lessons. 9 years on, I play tennis almost every day, and still plan to continue over the coming years.

I found out about deaf tennis a few years later through an email. It was advertising the National Deaf Tennis Champs for that year. I decided to enter it, and ended up walking away with the Boys singles trophy, and an invitation to come and play on the national squad. I then went on to win the Boys World Deaf Tennis Championships, and medal in multiple other singles/doubles events too.

As I went through school, I continued competing and studying regularly. I also took up the role of sports leader in my school, helping younger students take up/compete in sports alongside their school lives. I then went on to complete my A-levels in a more local sixth form, to create more time for tennis, and am now studying Natural Sciences at university, while playing on the team.

My aims in university tennis are to do well in the university BUCS leagues, as well as focus on winning our varsity match at the end of the year. I also want to continue our success against international universities, and over the coming years, lead the Blues team as captain. I’ll also be representing Oxbridge this summer against the Harvard-Yale team, and am training to come out on top in that fixture.

I also want to continue playing amongst Middlesex county, and be a part of the success of the county, by competing in more higher standard competitions. I also hope to keep winning medals in the deaf tennis scene, and continue to be an ambassador and role model in disability tennis.