Hello, my name is Alisha Reayer. I am from England and about to start my journey onto the professional tennis tour after I have successfully completed my undergraduate degree in Exercise Sport and Movement Sciences at The University of Memphis. I have been a student-athlete on a tennis scholarship at Memphis for 5 years, so at almost 23 years old I am excited to transition onto the professional circuit. 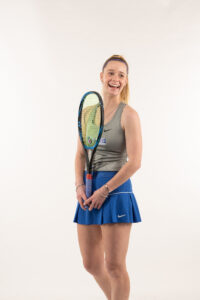 I first started playing tennis at the age of 7 years old when my Dad introduced me to the game. At this time I enjoyed playing many different sports such as cross-country, field hockey, netball, athletics, swimming, and gymnastics.

When I was about 10 years old my parents said to me if I wanted to be really good at a particular sport then I needed to focus on one. At that time I was competing in cross-country events and was always getting placed even when I was racing against girls who were older than me!

However, I chose tennis, and that is really where my journey began.

I started going to tennis practice before school started, then leaving at lunch time to practice some more, and also train once school had finished for the day.

At 14 years old I made the decision that I wanted to take my tennis to the next level, this meant I would leave my school where I had been for 8 years and go to London, which was about an hour from where I lived. I joined the best tennis academy in England, being coached by former world number #5, Jo Durie and her coach Alan Jones at the JTC Academy in Northwood, London. I stayed in a boarding house for a few nights a week with some of the other players. My schooling carried on with 1 on 1 tuition, tennis training would be 4 hours a day, with extra fitness sessions 3 days a week - my tennis level improved greatly and very quickly!

Unfortunately, I suffered a few semi-serious injuries, which meant I was never able to compete a huge amount in my junior career. Although at 17 I made my first (but not last) appearance in the final of a LTA Grade 2 tournament, and then at 18 my debut at the nationals took me all the way to the semi-finals of both singles and doubles, and progressing from there to winning my first British Tour earning my first amount of prize money!

At 18 years old I joined The University of Memphis on a full tennis scholarship where I found myself predominantly playing #1/#2 singles, and #1/#2 doubles over the course of my 5 years there. The greatest achievements at Memphis have been helping the team get their highest ranking of #47; winning 20 matches, which is the most since 1987; defeating #19 Tulsa when we were only ranked #70 at the time; and, to top off our season, we won the American Athletic Conference Championship, which is one of the tougher Conferences. This is the first time Memphis Women's Tennis had won Conference, so history was made! Winning Conference qualified us to compete at the National Collegiate Athletic Association!

And the next chapter begins... professional tennis career!

My aims and goals are to become as successful as possible in my tennis career, which I will be pursuing for a few years. And then after that I would love to continue in the tennis world, but as a high performance coach.