I am an orchestra conductor from Chile. I started playing the violin at the age of 8 in my hometown of Concepción. I come from a musical family, my father was a bass player and my brother is a pianist, so imaging our house was always full of life music. I formerly studied violin in the United States for ten years and now I am living in Vienna as a freelance orchestra conductor. I keep two wonderful projects in Chile that are very dear to me: Concert for Brotherhood - as a message to the world - that we can all live together as brothers and sisters with the motto: "Music as a common territory," and the Portillo International Music Festival - and academy for young musicians in the middle of the Andes mountains. 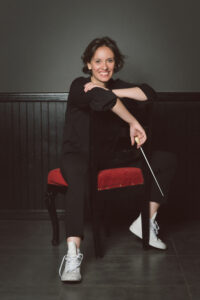 Alejandra Urrutia (Chile/Italy) is the 2020 recipient of the Mahler Award given by the Mahler Society of Mexico, which has been also granted to Sir Simon Rattle, Bernard Haitink and Gustavo Dudamel, among others.

During 2021, Alejandra won the "Special Prize" at the Only Stage International Competition (UK) which consists of six months of support and consulting with her international career and She also made her European debut with the Biel Solothurn Orchestra in Switzerland.

Since 2017 she has been assistant conductor of Iván Fischer with the Budapest Festival Orchestra.

In January 2019 after many years working with the youth orchestra of Curanilahue and observing the transformation that music has in the lives of young musicians, their families and the community, Alejandra launched one of the most innovative projects in Chile: the Portillo International Music Festival & Academy, an initiative for the musical instruction of young musicians in the majestic Andes Mountains. The academy focuses on learning the chamber music repertoire under the guidance of international teachers, in addition to classes of leadership, coaching and hatha-yoga for promoting a holistic development of Latin America's great talents.

As creator and conductor of the Concert for Brotherhood, Alejandra brings together more than 150 instrumentalists and a citizen choir of more than 200 people every year under the motto: "Music as a common territory" for this beautiful project born as a message of unity with our immigrant brothers and sisters in Chile.

She studied with maestros such as Robert Spano and Hugh Wolff at the American Academy of Conducting at Aspen, as well as in workshops with Marin Alsop, Kenneth Kiesler, Gustav Meier, Hans Graf, Larry Radcleff and Murry Sidlin.

She has worked internationally as conductor, violinist and educator with a masters and a doctorate from the University of Michigan.

Alejandra Urrutia is a Fanjul&Ward artist.

To transform the world through music.

To conduct regularly in Europe, USA and South America.

To continue with my two wonderful projects in Chile: The Concert for Brotherhood and the Portillo Music Festival.

In 2023 I want to be presenting my project “Concert for Brotherhood” around the world, in the most iconic cities in the world.

In 2023 I want to present the Portillo International Festival and Academy to the world and I want it to be one of the most important classical music festival in South America.

In 2023 I want to be in the roster list of a major agency in Europe and in the United States.

Alejandra is fine conductor, and a meticulous and refined musician.

Makes one weep as I have done now listening to this extraordinary concert. It renews all one’s energies and determination to make our outreach like this everywhere and how inspiring it can really be!!! I am moved to the core. And delving to find the strength to live up to this…!!! Love and immense thanks to you Francisco [Bricio] for being there and for knowing that this is us!!! And must be more and more in the future!!!!! So grateful for this opportunity and for our future and let’s dream! And do!!!

I had the unexpected opportunity to serve as concertmaster under the brilliant Chilean conductor Alejandra Urrutia this past January in a number of concerts in Portillo and Santiago. Alejandra had total command of the music and of the orchestra. What struck me the most was that she had a vision for each piece we played. And her ability to communicate this vision to the orchestra and audience was impressive. She is a charismatic performer who brings the great qualities of honesty, clarity and warmth to everything she approaches. I enjoyed the experience enormously.

I am so deeply moved by this performance!!! Bravi to all. What a testament to the power of this music. And what an awe-inspiring example of what we must bring to the world.

Everything sounds wonderful! Such a huge production and effort! Excellent sound from the orchestra! So many young people! What a joy! I hope this will also be the resurrection for Chile. Bravi tutti!

What a great performance! Urrutia is fantastic, please let’s see and hear more of her – the soloists and orchestra were stunning, and the ‘Beginner’s’ Chorus was very impressive. Plus, the video direction was superb (though the camera tracking around in front of the orchestra must have been distracting…) – there’s a real sense of being there.